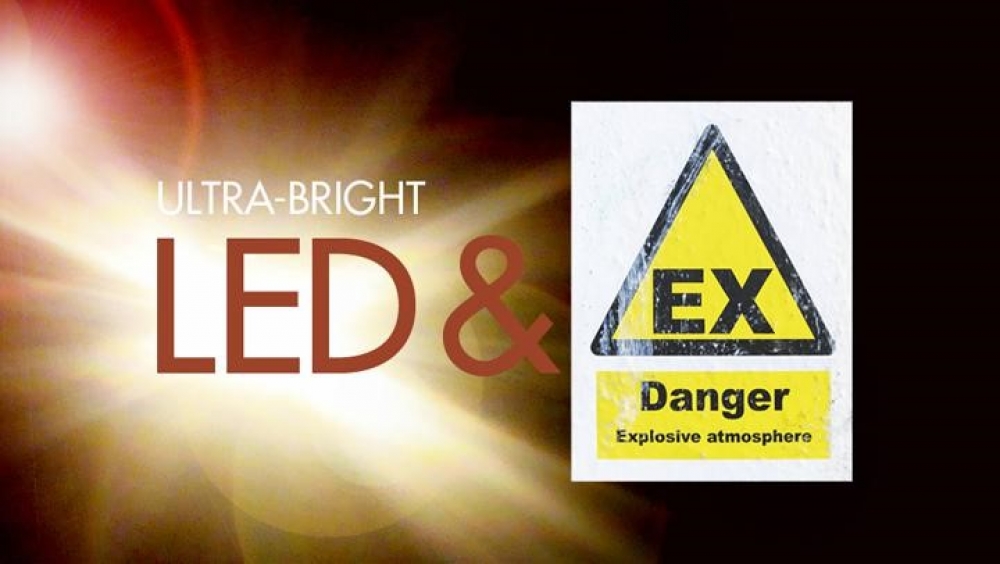 It is a reoccurring theme in the modern world: new technology goes through a period of rapid change before stabilizing. Moore’s law correctly predicted the rapid development of CPUs. We are seeing similar development in data storage. In the world of luminaires, this phenomenon is happening with light emitting diodes, or LEDs.

Where the light (lumens) produced by incandescent and fluorescent luminaires has remained stable for decades, LEDs are getting stronger all the time, with double-digit leaps in relative power output year-on-year. Applications of LEDs are also expanding, including for hazardous areas.

The new, more powerful LED technology presents real challenges for the safety of products used in hazardous areas. Safety experts have been discussing this more and more as their concerns about the potential dangers of LEDs increase.

In September 2016, at the IECEx meeting at Umhlanga, South Africa, these talks turned into actions. The chairman of the Ex Technical Advisory Group (ExTAG), Professor Xu Jianping, presented a detailed paper about the issues regarding LEDs and the possible ignition sources caused by powerful light.

This analysis was based on IECEx certificates. Comprehensive data about other certifications such as ATEX is not available. However, according to certification experts, in the situation is likely not better in these other areas.

The main message is clear: there are too many different interpretations of the standards, and this is resulting in compromises on safety.

There are four key factors that determine if otherwise harmless light can become an ignition source: A magnifying glass, for example, can focus sunlight radiation, creating a small, yet powerful point of light that can burn paper/dust. The powerful LEDs of today can easily create ignition sources if care is not taken in the design and manufacturing of luminaires.

The illustration below shows some basic scenarios where optical radiation can become a hazard.

The distance between a light source and an external surface with absorbers may be critical when taking into account optical radiation.

Hundreds of working hours have been invested in creating standards that account for the possible risk of powerful light sources. One of the standards specifying limits for equipment used in explosion-hazardous areas is IEC 60079-28 (Protection of equipment and transmission systems using optical radiation). The first edition was published in 2006, and the second edition in 2015.

Although this standard has been available for over ten years, the presentation from Chairman Xu demonstrated how the implementation of IEC 60079 -28 is not consistent. He showed, for example, that out of 1,000 certificates issued for luminaires used in Ex areas, less than 10 % take into account the risk of optical radiation based on consistent and standardized evaluation in accordance with IEC 60079-28.

Perhaps the reason for ignoring the risk is that, so far, the health and safety statistics do not show accidents directly caused by radiance from luminaires used for general purposes.

For the sake of clarity about the risk, consider a common household example of radiation, the toaster. A toaster (P=750W) toasting two pieces of bread provides approximately 5mW/mm2 of radiation during toasting process. That is enough energy to toast the bread after a short while, or completely burn it in time. That same amount of radiation, 5mW/mm2, is the commonly used limit for safe optical radiation in IEC 60079-28. Of course the wavelength of toaster radiation is different, but this example definitely demonstrates the impact of radiation.

When a product is intended for Ex-areas, the design has to be tested and accepted by an independent 3rd party, commonly referred to as a Notified Body. The Notified Body issues certifications in accordance with its interpretation of the applicable standards. There are many ways to perform the certification, and so far, there are also differences in how Notified Bodies evaluate optical radiation.

Confusion in the marketplace

Some of this variation can be explained by markets. For example, within the EU, the ATEX certification process for Ex products, the design is evaluated by the Notified Body based on testing data and technical documentation. The responsibility of the Notified Body is actually limited to the provided test data, technical documentation, as well as its own tests performed on product samples. Actual production responsibility remains with the manufacturer and is confirmed by CE declaration.

The international certification process follows the IECEx framework. This is arguably more complex and demanding compared to ATEX. The Ex Certified Body (ExCB) is responsible for certifying the production design and production process. The required testing goes well beyond sample products.

This bigger responsibility may be one of the reasons why the IECEx certification is prone to greater variation compared to ATEX. Chairman Xu showed how that the certification process with IECEx is not consistent. The final, certified result is expected to be similar, especially when focusing on implementation of optical radiation requirements. This is the reason to have standards like IEC 60079-28 in the first place.

Certified Ex luminaires are purchased by major industrial companies around the world. When selecting equipment for areas with possible risk of explosion, due care must be taken. These companies do not necessarily have experts qualified to understand the differences in the safety of products. The person responsible for selecting and accepting products must be able to trust the certification of a product.

It is paramount that Notified Bodies certifying the safety of a product intended for use in explosion - hazardous areas follow comparable procedures resulting in certificates and full information on the safety of the given product.

If some aspects of safety are neglected for one reason or another, the individual purchasing the product typically is not aware of the differences in the safety levels. Often the purchaser is just checking that the Ex certification exist, and not digging into the details of what that certification actually covers.

Op is and the certification process today

The price of the product is naturally also a key checkpoint alongside certifications. Products bearing the mark ‘op is’ (which stands for ‘inherently safe optical radiation’), likely have a higher price than those without this marking. The development process of products aiming for the ‘op is’ marking is without question more demanding, leading to the higher price of the certified product.